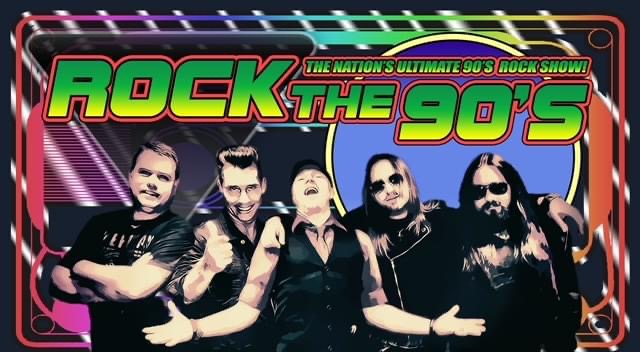 Rock the 90’s: The Official 90’s Rock Tribute (formerly Broadcast 90: The Ultimate 90’s Rock Tribute) takes you back to the glory days of guitar driven rock – an eclectic buffet of all the best in 90’s alternative radio rock – performed exactly like the original recordings. No hiding behind gimmicks or costumes – Rock the 90’s brings you a high-energy 90’s rock show that will take you back to a time when alt-rock ruled the airwaves.

Rock the 90’s is not just a band, it’s an experience. A well-rehearsed, high-energy show that travels the road of 90’s rock on all levels, including the detours and back roads of an often forgotten decade that produced some of the best guitar-driven rock in music history.

One band, one mission…to spread the gospel of 90’s alternative rock-n-roll to the masses! It’s a 90’s throw down like no other you’ll experience.

Hailing from Middle Georgia USA, Rock the 90’s was formed in late 2015 (as Broadcast 90) to pay homage to the last golden decade of guitar driven rock: the 1990’s. The goal was to assemble an all-star super group of seasoned players to give the genre its proper due. Each member of Rock the 90’s has clocked thousands of hours in both the studio and stage and have performed all over the United States, not to mention performing with some of the most iconic 90’s music artists including Sister Hazel, Drivin’ n Cryin’, Sugar Ray and more…

Known for their ability to sound exactly like your favorite 90’s rock radio hits – Rock The 90’s specializes in replicating the studio recordings of the 90’s rock genre – bringing them to life on stage in an authentic concert experience. Rock the 90’s is a true as it gets to an authentic 90’s rock experience, with a high-energy, concert style show.

It’s no holds barred, as Rock the 90’s combines a heavy dose of 90’s rock with an energetic, over the top, arena style show that is guaranteed to keep you singing song after song, all night long!

Click here for tickets and VIP Booths
Don’t forget to stick around after for the Island’s Biggest Dance Party until 2am!